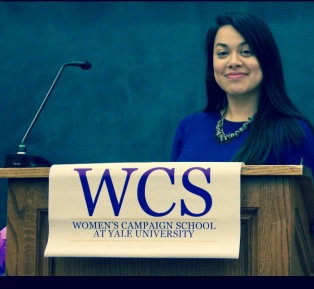 Kayla was born and raised in New Britain, Connecticut and attended schools in the New Britain district, including New Britain High School, class of 2009. That same year, she attended Central Connecticut State University (CCSU) and during her time there she was a product and counselor of the Latino ConnCAS program, which was a mentoring program for Latino students at the CCSU campus. She interned in U.S. Senator Richard Blumenthal’s Hartford office and afterwards on U.S. Senator Chris Murphy’s 2012 Senate campaign at their New Britain headquarters.

After receiving a Bachelors of Arts in Psychology at CCSU in 2013, she moved to Washington D.C. for 2 years to work for U.S Senator Chris Murphy as a Staff Assistant and Legislative Correspondent. Kayla then returned back to her home state, Connecticut, to work for Senator Murphy as an Outreach Aide in the Fairfield County area, which she presently still does at the age of 26. During this last Presidential Democratic Primary in the state of Connecticut, she was a field organizer for the Hillary for America Campaign in Bridgeport. Most recently, she was a proud graduate of the Women’s Campaign School at Yale, class of 2017. She enjoys working in local and federal politics, supporting feminist & minority organizations, local businesses in Connecticut, and shopping.